As the mild temperatures of fall’s Indian Summer descend upon Oklahoma, the state’s renowned American Indian heritage is brought to life with a variety of Native American festivals, events and powwows. 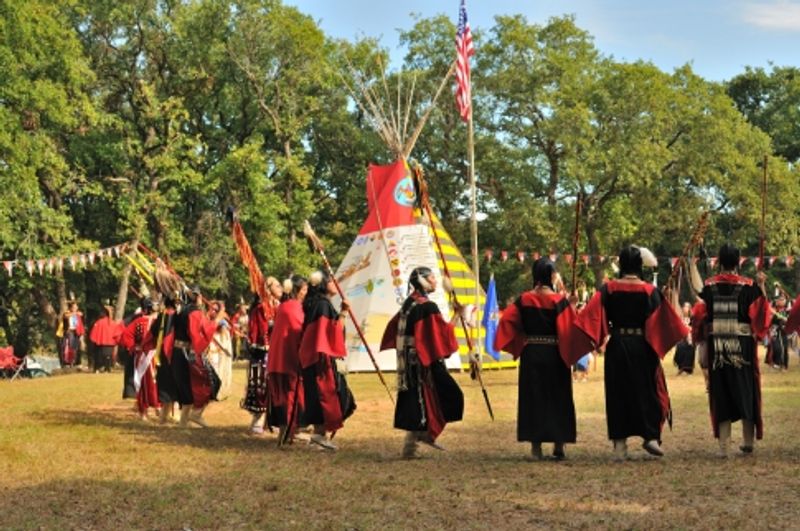 Traditional dance is an important part of the Kiowa Black Leggings Warrior Society Ceremonial held in Anadarko each year.

Oklahoma’s rich Native American heritage is famously diverse, as 67 tribal nations have called this land home. With fall ushering in cooler temperatures, gorgeous foliage and a vibrant event season, you can experience Oklahoma’s diversity firsthand by attending a number of time-honored Native American events held throughout the state.

These events, which range from single tribe celebrations to large intertribal powwows, are key to keeping the traditions of Oklahoma’s Native American ancestors alive. Tap into the spirit of the powwow by witnessing Native dancing, singing and artistry. Mesmerizing colors captivate and soulful sounds resonate during these activities, where customs are preserved for the future.

An incredibly popular send-off to summer in early September, the Choctaw Nation Labor Day Festival & Powwow is an impressive showcase of Choctaw Nation traditions. This event, which seems to increase in size every year, features everything from an intertribal powwow to live performances by some of music’s biggest stars. Watch as Miss Choctaw Nation is crowned at the Choctaw Princess Pageant, visit the Choctaw Village to see flint knapping, stickball and silversmith demonstrations, and witness the intense competition of the annual stickball tournament. Hang around for free concerts – past performers include Ronnie Milsap, Travis Tritt and Vince Gill.

Visitors to the annual Choctaw Nation Labor Day Festival are also invited to take tours of the Choctaw Nation Museum and view the art show held there. Make sure to attend the intertribal powwow and admire the vibrant regalia of the American Indian dancers during the gourd dance, grand entry and dance competitions. The men and boys compete in dance categories including straight, traditional, grass and fancy dance, while the women and girls compete in cloth, buckskin, jingle dress and fancy shawl dance categories.

The renowned Standing Bear Powwow, one of the most significant, long-standing Native American events in the country, brings together the six north-central tribes of Oklahoma for displays of spectacular regalia and intertribal dancing in late September. Come to this free public event to witness the breathtaking movement of dance around Ponca City’s outdoor powwow grounds, as well as the crowning of the Standing Bear Princess. The event begins with gourd dancing, leading straight to the grand entry, where all powwow participants line up to display the pageantry and spirit of the powwow. Check out various arts and craft booths featuring jewelry, sculpture, paintings and more, then stick around Saturday night for a traditional meal of corn soup and fry bread. Members of the Kaw, Osage, Otoe-Missouria, Pawnee, Ponca and Tonkawa tribes will all be represented.

Make your way to Tulsa to see the powerful sights and sounds of Native dancers overtake the Mabee Center during the annual Powwow of Champions event. A major intertribal competition, the Powwow of Champions celebrates the artistry of traditional dancers as they stomp and twirl around the arena to the intoxicating beat of drums. Browse eye-catching paintings, pottery, jewelry, clothing and crafts in the Native American arts and crafts market before checking out the powwow, or simply grab an Indian taco and settle in to watch the grand entry, followed by a variety of dance competitions. From junior girls’ buckskin and jingle dancing to senior men’s traditional, straight and grass dancing, you’ll witness precise dance steps set to powerful drumbeats as the dancers compete for top honors.

Mesmerizing colors captivate and soulful sounds resonate during these events, where customs are preserved for the future.

Immerse yourself in Cherokee heritage at the Cherokee National Holiday in Tahlequah. This event, a gathering of Native American families and communities, commemorates the signing of the Cherokee Constitution in 1839 following the Cherokee removal to Oklahoma. Open to the public and founded in 1953, this event has expanded to feature a juried art show, arts and crafts booths, a car show, and a competitive stickball game, among many other activities.

Don’t miss the intertribal powwow, a mix of traditional elements and other categories such as men’s Northern drum and women’s Cherokee tear dress. Check out the holiday parade to see the Cherokee Nation color guard, dancers and royalty, and stick around for the cook-off, where a variety of native dishes, including fry bread and dessert dumplings, will be judged and served to the public. Bring the kids out to this event, where they’ll have plenty to keep them occupied, such as Children’s Fun Days and a fishing derby.

Oklahoma Indian Summer, a world-class Native American event that has been hosted by Bartlesville for over 20 years, brings creativity center stage. Browse the impressive fine arts market where over 30 artists display their works for viewing and for sale, and a youth art show puts the talents of local students on display. Craft and cultural demonstrations, along with Native American storytelling, enrich this festival and make it as educational as it is entertaining. An intertribal powwow will take place on both Friday and Saturday evening, at which the Oklahoma Indian Summer Princess will be crowned and contestants will vie for first place in the dance competitions.

The culture of the Chickasaw Nation comes alive during the Chickasaw Nation Annual Meeting & Festival, a week-long event held in south-central Oklahoma’s Chickasaw Country. Activities are scheduled throughout the week, but the main events roll out on the festival’s final Saturday. Start your day with the State of the Nation address, then head out to Pennington Park for a day of fun. The park fills with inflatables, a petting zoo and make-and-take tents, where children can play for hours. Arts and crafts vendors will showcase Native American arts and crafts, and a vast array of food will be available.

Visit the southeastern art show and market on the capitol grounds, and learn from cultural demonstrations. Watch the parade downtown and enjoy the spectacle of dancers in full regalia, floats decorated in Chickasaw style, tribal dignitaries and more. In nearby Sulphur, tour the Chickasaw Cultural Center, try a traditional Chickasaw meal in the Aaimpa Café and experience breathtaking cultural exhibits. An action-packed rodeo closes out the festival with a bang.

Visitors to the Comanche Nation Fair in Lawton will enjoy an array of festivities, from archery competitions and art shows, to bull riding and a rodeo. Children will have a blast at the free kid’s carnival, while adults can check out classic hot rods in the car show. Known as the largest American Indian event of southwest Oklahoma, the Comanche Nation Fair also invites festival-goers to check out popular sporting tournaments, traditional storytelling and a free concert. Observe a variety of dance contests in the powwow and take in the vivid colors of dancers decked out in dresses of feathers and elaborate beadwork as they compete in categories from Tiny Tots to Golden Age. In addition to these activities, a hot dog feed, teen dance and fun run are also scheduled.

In honor of warriors and veterans, the Kiowa Black Leggings Warrior Society Ceremonial in Anadarko focuses on Native Americans in the military and their sacrifices, both for their tribe and country. Participants of this outdoor ceremony wear red capes, a black string shawl and darkened legs. Legend has it that the Kiowa received blackened legs from running back onto a battlefield after it had been burned by fire – the tribe keeps this battle-worthy tradition alive by wearing black leggings or painting their legs black. During the ceremony, tribe members also carry a lance, each one decorated to reflect the owner’s military past. At this event, you’ll see military re-enactments, and keynote speakers will address the crowds. War hoops, ceremonial drums and rifle fire are among the sounds at this dramatic event, where participants sing war-related songs created especially for this ceremony.

Held at Adawe Park, all ages will have a great time at the activity-packed Ottawa Powwow & Celebration in Miami. Visitors can witness plenty of traditional dancing and have a blast with the no contest dancing fun. By camping out in a tent or RV, guests can also enjoy a whole weekend full of different dances, from the gourd and stomp dances to the intertribal war dance. Ottawa tribal members will also perform the turkey dance after demonstrating how to play a traditional hand game. Other highlights of this celebratory weekend include the fierce Indian Junior Olympics as well as plenty of singing. The public is also welcome to come on down to sample authentic Indian cuisine from the concessions and purchase handcrafted gifts and artwork from Indian traders on site.

Learn about the art, traditions and etiquette of the powwow by reading Understanding the Powwow.