Endless Skyway: The Early Days of Aviation in Oklahoma

From the first days of mechanical aviation to Wiley Post’s escapades around the globe, Oklahoma played a crucial role in the early evolution of flight. Discover some key moments in the first 25 years of the state's rich aviation history, along with destinations that let you relive this innovative era. 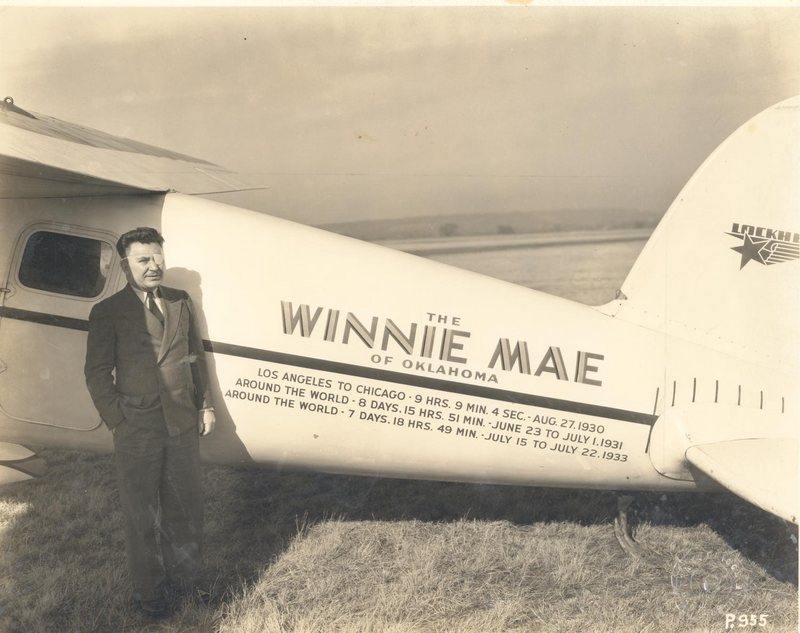 Three years after statehood, Oklahomans witnessed the first mechanically powered flight over the state. On March 18, 1910, celebrated stunt pilot Charles F. Willard flew an exhibition with a Curtiss Pusher airplane above the Historic Capitol Hill district in Oklahoma City. Willard’s plane only rose 15 feet off the ground on the first exhibition day. On the second day, Willard flew about 25 feet off the ground and lasted half a mile before he crashed. The pilot walked away unharmed, and although many considered the weekend unsuccessful, this landmark event established Oklahoma’s distinguished aviation history.

See a replica of the Curtiss Pusher plane flown by Charles F. Willard at the Stafford Air & Space Museum in Weatherford.

Aircraft innovation came to northern Oklahoma a year after Willard’s flight when Clyde Cessna tested plane prototypes in the Cherokee Outlet. Cessna developed a passion for aviation while attending an air circus in Oklahoma City. After purchasing his own materials, the designer took his first plane to the area near Salt Plains State Park for testing. Nearly a dozen prototypes crashed, but on December 18, 1911, Cessna achieved his first successful flight of five miles and reached an altitude of 200 feet. Over the next two years, he staged exhibition flights in Enid, Cherokee, Pond Creek, Kremlin and other Oklahoma towns.

The Cherokee Strip Regional Heritage Center in Enid features a display on Oklahoma aviation, including information about Cessna. You can also visit the Alva Regional Airport Museum for a detailed exhibit on Cessna’s work in the Sooner State.

When the United States entered World War 1 in 1917, a plane testing program was launched and began bringing aircraft production to Oklahoma. It was during this time that Joseph Bartles (son of oil businessman Jacob H. Bartles) formed the Dewey Aeroplane Company and secured a contract to manufacture Curtiss JN-4D "Jennies" for the government.

The Bartlesville Area History Museum features a display on Joseph Bartles’ contributions to aviation efforts in Oklahoma. You can also learn more about the Bartles family at the Dewey Hotel Museum.

In 1915, Fort Sill earned its reputation as the birthplace of Army combat aviation when it received a squadron of Jennies for pilot training. During this time, Fort Sill pilots flew to various grass airstrips, one of which was located near the Oklahoma Capitol. Pilots were trained for the first time in navigation, map reading and rudimentary aerial photography. This testing stage saw vital improvements to airplane functionality, including wing supports and landing gear struts. To see WWI-era artillery collections in Fort Sill, pay a visit to the US Army Field Artillery Museum.

Oklahoma’s contributions to WWI aviation continued beyond Fort Sill. Pilot William Ponder of Mangum, Oklahoma made history in 1917 for shooting down more than five enemy planes while flying with the French army. The city of Mangum’s first municipal airfield was later named Ponder Field. Captain Ponder’s legacy is honored at the Old Greer County Museum & Hall of Fame.

After his discharge from the US Army, civic leader Stanley Draper formed an aviation committee in 1919, which oversaw the construction of Oklahoma City’s first airport in 1920. A few years later, Draper created another small airport named Southwest Park, near the present Woodson Park. In his later role as the managing director of the Oklahoma City Chamber of Commerce, Draper was instrumental in locating the Midwest Air Depot, now Tinker Air Force Base. Learn more about the state’s early airports on the Oklahoma Historical Society’s website.

Oklahoma’s thriving oil industry fueled aviation advancements across the state in the 1920s. On May 14, 1928, oilman W.G. Skelly opened the Tulsa Municipal Airport, which became one of the world’s busiest airports in the early 1930s thanks to Oklahoma’s oil boom. Experience these opulent days of Art Deco by visiting a replication of the airport’s 1931 terminal at the Tulsa Air and Space Museum.

That same year, the Transcontinental Air Transport (TAT) added a stop in Waynoka on their coast-to-coast transportation route. Thanks to the airport’s pristine design, TAT brought national attention to Waynoka, drawing celebrities like Amelia Earhart and Will Rogers to the town. Head to the Waynoka Air Rail Museum to see exhibits covering the Transcontinental Air Transport stop and its significance to the town’s unique transportation history.

At the dawn of the 1930s, the power of flight expanded medical resources to towns across Oklahoma. Acclaimed surgeon Dr. George Fowler Border’s “Wings of Mercy” was one of the first air ambulances in Oklahoma. Pilot Paul Powell, a native of Mangum, flew this Stinson model SM-8 aircraft daily to transport patients and make calls across the state and the entire nation. Learn more about Dr. Border’s work at the Old Greer County Museum & Hall of Fame.

Without a doubt, the most notable aviation figure during this period was Oklahoma’s own Wiley Post. In 1931, Post flew with navigator Harold Gatty around the world in a record eight days and sixteen hours. Post would beat that record in a solo performance two years later in a Lockheed 5C Vega, known as the Winnie Mae. On July 15, 1933, he completed that global trip in seven days, 18 hours and 49 minutes.

In the 1930s, Post began a legendary friendship with entertainer and cultural icon Will Rogers. The Oklahoma dynamic duo became close friends after Post’s first around-the-world flight in 1931, as Rogers was an avid aviation supporter. Of the record-breaking flight, Will wrote: “This is one ship I would have loved to have been a stowaway on.” In 1935, Post invited Rogers to embark on a flight on a Lockheed Explorer plane.

On August 15, Post and Rogers tragically perished in a crash near Point Barrow, Alaska. The loss of both men greatly impacted Americans during the Great Depression, with Post being the nation’s most distinguished aviator and Rogers one of its most popular humorists and beloved commentators.

Their legacy lives on in many of Oklahoma’s cultural institutions, from the photo-worthy Winnie Mae replica hanging over the Devon Great Hall at the Oklahoma History Center to displays on Wiley Post’s life at the Oklahoma Aviation and Space Hall of Fame inside Science Museum Oklahoma. To see vintage planes in action, head to the annual Will Rogers & Wiley Post Fly-In at the Will Rogers Birthplace Ranch in Oologah.

Established in 1929, The 99s was an international organization established by 99 women pilots. In 1955, the organization's headquarters moved from New York City to the Will Rogers World Airport terminal building in Oklahoma City. The 99s Museum of Women Pilots showcases the history of women in aviation, from the earliest flights to the present day. Exhibits include famous aviators such as Amelia Earhart, Geraldyn "Jerrie" Cobb, Marion P. Jayne and many more.