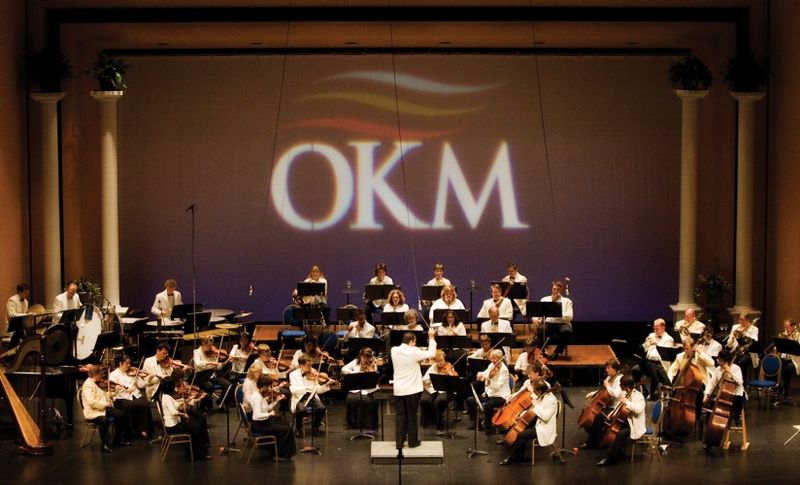 Amici New York Orchestra has been the heart of the OKM Music Festival since its beginning in 1985.

Come June, Bartlesville is home to the OK Mozart International Festival, a tradition that has been continued for more than 20 years. The musical event sends sweet notes, soaring strings and beautiful brass singing out into Oklahoma’s clear summer skies.

The annual nine-day festival celebrates the wonder of the musician, both vocal and instrumental, and of music, both classical and in many other genres.

“OK Mozart continues to expand in diversity, but it will always at its heart remain a classical music festival,” says Executive Director Shane Jewell.

There’s something not to miss in each of the event’s three series: the C (for Classical) Series, the largest and the one that organizers consider the core of the festival; the X (for Cross-over) Series, a collection of events that doesn’t really depend on classical music at all; and the D (for Discovery) Series, which reaches out to a broader audience with music from a variety of genres and pieces from the performing arts.

So much music; so many days!

Remember your Latin? Amicus and amica are the masculine and feminine for “friend.” The plural of that is amici. OK Mozart has friends aplenty in the talented musicians who make up the Amici New York Orchestra. That relationship began in 1983, when the orchestra gave a concert in Bartlesville. Two years later, OK Mozart came to be, and Amici became the house musicians.

With a nod to the world of mash-ups and remixes and globalization, OK Mozart programs music that crosses boundaries and breaks down any easy categorization.

Amici performs Mozart and a host of other composers, including Beethoven, Haydn and Rinehold Glière, often performing alongside the festival’s world-renowned featured musicians. Amamus (“We love,” in case you’ve forgotten) these amici, for sure.

From Classic to Crossover

During the nine days overflowing with a myriad of musical masterpieces that put the classical in the C series, you can also hear the OK Mozart Classical All Stars Chamber Music Ensemble; Opus One, a group of four extraordinary instrumentalists; and the Bartlesville Symphony Orchestra.

But those D-Series and X-Series events also beckon with their genre-bending, envelope-pushing concerts. With a nod to the world of mash-ups and remixes and globalization, OK Mozart programs music that crosses boundaries and breaks down any easy categorization.

A signature festival event is the Woolaroc Outdoor Concert, held in a very casual setting on the edge of town at Woolaroc, which includes a nature preserve that hosts the concert. Everyone brings lawn chairs and picnic baskets and wine. It’s a gorgeous location overlooking tranquil Clyde Lake, and the ravine makes a natural amphitheater. This stirring concert always ends with a superb fireworks finale.

Of course, it isn’t just on the various stages around Bartlesville that OK Mozart takes place. A series of Showcase Events educate and entertain all over town. You can make Civil War Era jewelry at the Frank Phillips Home, participate in an evening called Contra Dance! An Evening of Jigs and Reels at The Grande Ballroom, and go Around the World-in Under 80 Minutes! with a concert organist at the First United Methodist Church. Two visual artist showcases are to be found in the Lyon Gallery of the Bartlesville Community Center. And trust me: There are many more options for cultural excitement.

To fill your plate with more than music, you can visit Café Mozart for lunch or a three-course prix fixe dinner. To take home more than good memories of great music (and an extra pound or two), you can drop by the OKM Gift Shop and the Moz-Art Gallery inside Community Hall to buy souvenirs and pieces of art.

This summer event may be the most fun you can have while enjoying some of the best musical performances in Oklahoma.