The humble chicken fried steak has earned its place as the centerpiece of the official Oklahoma state meal, proving no one does this dish better than the Sooner State. 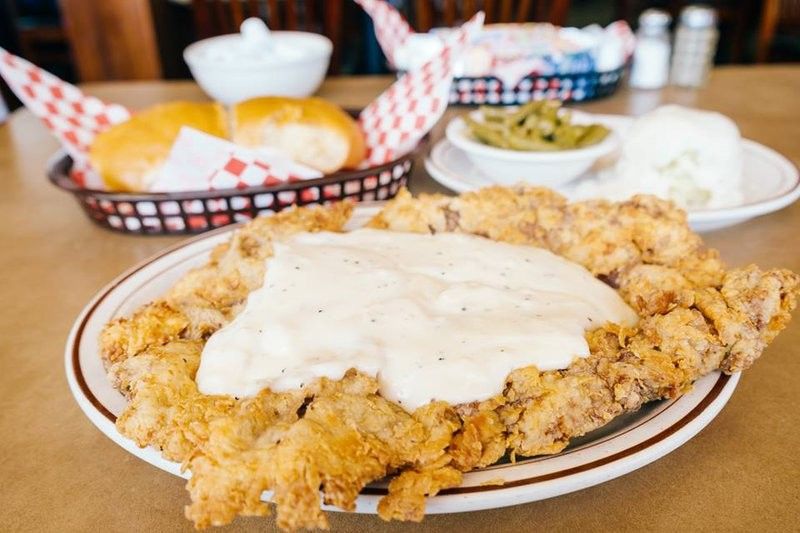 From early morning to supper time, stop by Jimmy's Round-Up Cafe & Fried Pies in OKC and experience the scratch flavor of a hometown cafe.

It all starts with a piece of beef - traditionally cube steak - that is tenderized, breaded in a special blend of seasonings and fried to perfection. Cream or skillet gravy is poured on with a heavy hand, completing this iconic meal. Whether you prefer it on a sandwich at a kitschy diner or served alongside mashed potatoes at a trendy steakhouse, everyone loves this legendary Oklahoma dish. Try out these top spots and find your favorite.

Clanton’s Cafe in Vinita has been serving their famous chicken fried steak since 1927. Each plate begins with Tulsa cube steak tenderized and battered using a 90-year-old tried-and-true recipe. The Food Network cameras captured the magic of this dish on an episode of “Diners, Drive-Ins and Dives” and the dish has been featured in Gourmet Magazine, but the only way to truly experience this breaded and fried luxury is to taste it yourself, in all its gravy-laden glory.

A Tulsa tradition since 1929, Nelson's Buffeteria is best-known for its delicious meringue pies and mouthwatering, award-winning chicken fried steak. Each chicken fried steak is cut, tenderized and breaded by hand daily. Served with classic comfort sides like mashed potatoes and gravy, green beans, fried okra, coleslaw, baked beans, and mac & cheese. Although the original location closed its doors in 2004, the new iteration of the family-owned Nelson's Buffeteria brings back nostalgic waves of times gone by.

The Red B Restaurant - Idabel

The accolades have been piling up for The Red B Restaurant in Idabel since being named Best Chicken Fried Steak in Oklahoma by USA Today. While you can order this fork tender steak with sides as an entree, you’ll also find it pop up in surprising ways on the menu. Look for special offerings like chicken fried steak breakfast biscuits or chicken fried steak strips on a cheese and jalapeño potato waffle covered in gravy. Folks to this extra friendly eatery also rave about the breading on the okra and the fresh greens paired with beans and ham.

Another sublime chicken fried steak can be found at Cheever’s Cafe in Oklahoma City. A rich, savory crust hugs the enormous piece of beef after it’s fried to perfection. After the fryer, this delicious entrée is draped with a silky layer of jalapeno gravy and served alongside garlic-infused, red-skinned mashed potatoes. Leave that steak knife on the table because this chicken fried steak is so tender it cuts with the simple edge of a fork.

For serious chicken fried steak fans, Kendall’s Restaurant in Noble is the place to be. This eatery features the Chicken Fry Challenge, an hour-long dare to devour a plate of three huge chicken fried steaks alongside a salad, potatoes, green beans, a biscuit and cinnamon rolls. If you’re unprepared for such a feast, the chicken fried steak comes in smaller lunch and dinner portions.  Begin with an order of fried okra or loaded potato wedges before digging into your steak. Remember to leave room for a complimentary homemade cinnamon roll and finish your meal on a sweet note.

The chicken fried steak is famous on its own at Del Rancho, but diners go nuts for it on the steak sandwich supreme, where the thick ribbon of breaded beef lands between two buttery buns with lettuce, tomato and a spread of Miracle Whip. Country music star and Oklahoma native Toby Keith has even named this sandwich as his all-time favorite meal. With a handful of locations scattered throughout central Oklahoma, you’re never too far away from this Sooner State staple.

Some restaurants rely on quantity over quality, but at Jimmy’s Round-Up Cafe you’ll get both. The chicken fried steak, which comes hand-breaded, fried and covered in gravy, is so large it is served on its own plate. Pair it with two sides of your choice and their famous dinner rolls for a meal that is as memorable as it is filling. Be sure to get some of the fried pies to go; they come in seasonal flavors like apple, apricot, cherry, coconut and peach.

If you’re looking for an extra tender chicken fried steak, look no further than Hammett House. Hungry diners come from near and far to try the “Pamper Fried” Chicken Fried Steak at this Claremore staple, which has been in business for over 50 years. Their specialty steak starts with a lunch-sized portion of tenderized round steak that’s double-breaded in house seasonings and deep fried to perfection before being topped with made-from-scratch cream gravy. Popular sides include hot “mashed potato” rolls that are handmade each day and salad topped with one of the restaurant’s signature dressings - cilantro lime ranch or spicy garlic (locals call it “the pink stuff”).